Until the 89th annual ADSFR!

The 89th Alabama Deep Sea Fishing Rodeo will be held July 14-17, 2022. The ADSFR is a 3-day Captain’s Choice tournament and a Southern Kingfish Association (SKA) sanctioned event. The total awards package is valued up to one million dollars in cash and prizes and anchored by a boat, motor, and trailer packages.

The 3-day event features 30 categories with prizes awarded for 1st, 2nd and 3rd place in all categories. One Master Angler is also awarded along with cash prizes for King Mackerel, Speckled Trout and Big Game Jackpots. 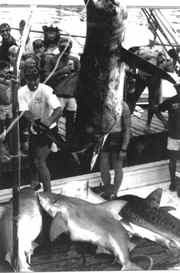 In the sultry summer of 1928, a party of Mobile businessmen were sliding through the tides of Mobile Bay, their fishing lines stretched for that elusive Big One. Surprisingly, the Big One struck. But the catch was no hard-fighting fish, it was a simple, but grand idea of organizing a competitive fishing tournament.

The businessmen met for several weeks following that fishing trip in the home of L.G. Adams, Sr. and eventually, with the prodding of Alabama State Game and Fisheries Commissioner I.T. Quinn, spawned the Alabama Deep Sea Fishing Rodeo. By this simple move, Mobile was to be popularized as a mecca for saltwater anglers.

The first rodeo in 1929 was such a success that Quinn suggested an association be formed to perpetuate the contest on an annual basis. The first competitive fishing event in America to be dubbed a rodeo had hosted (at the time) a staggering 260 widely enthusiastic sports fishermen.

The first rodeo ticket was $5 and covered sleeping quarters and special prizes. Meals were a la carte seafood delicacies. Also, because a fast news service was needed to transmit news of daily catches to town, carrier pigeons were pressed into service.

In earlier years Fort Gaines Pier headquartered the Rodeo. A boat ride was the only transportation to the island. Rodeo brochures boasted, “There’s a fish for everybody at the rodeo and they bite as a matter of civic pride.”

Chief instigator Adams, the rodeo’s first president, served for five years, riding herd on entrants from not only Alabama but eleven other states and the District of Columbia. Many Mobilians credit Adams, hearty, zesty leadership with the undeniable prosperity of the rodeo during those formative years.

Nineteen years later, in 1948, the Mobile Junior Chamber of Commerce, and subsequently the Mobile Jaycees, assumed leadership of a rodeo which had grown too grand to be staged every year by interested individuals alone.

Photos shown above were provided by USA Archives.

The Rodeo now attracts over 75,000 spectators per year to its current Dauphin Island site. It also attracts over 3,200 fishermen each year and involves a host of civic-minded Jaycees and many volunteers who work tirelessly to advance the art and spirit of Sport Fishing in Alabama.

The rodeo has also set up two scholarships in the name of Dr. Gary Nelson, who collected scientific data at the event from 1984 to 1997. During that period, over 253 species of marine life were studied and 2,577 specimens were taken for research.

Your support of the Alabama Deep Sea Fishing Rodeo helps us continue to make these contributions. Get your tickets today!